Kiev (in Russian: Киев) was the division of the large state-owned Arsenal factory (dedicated to military production), which was responsible for manufacturing cameras and optical instruments. The name derives from the homonymous city of Kiev where the factory was located.
The Arsenal factory has produced numerous clones of mostly German pre-war cameras , while the Kiev has produced several original designs.

I'm sure they are many Devil's Bridge out there. I guess people fear bridges, for good reason. This one is cute . Took with kiev 6c, zodiak 30mm fisheye

Vulci from the Devil's Bridge

The view from the bridge. I was very brave taking this picture, being worried about my camera falling in the void. In the background, a more modern but sadly less devilish bridge.
Took with my sturdy kiev 6c, arsat 30mm 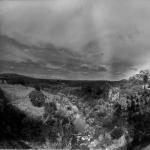 Sings, lamps, fences in an urban portrait
Took on a photo paper diy roll with a kiev 88, volna3 lens 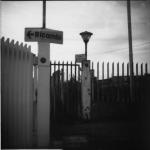 a walk through the reed

A car is joining me - took with a kiev 88, volna 3 lens on a self made photo paper roll, hand held in a very bright day 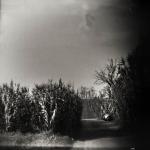 Well, there is a winter hat on that plant, even if is hard to see. Trust me, is there, and I haven't placed it myself. It was there. So, this is defenetly a Christmas Picture! Merry Christmas, or, for politically correct people, just Happy Merry Holydays! Took with a kiev 88 , vega 28b, foma 100 film. Scanned as a "color negative", and left it in colors, since black and white is not black and white for real. But this is another story