Tuesday, February 7 "IMAGINA" d'italie service of Adriano Albano see the sunrise on the quiet port of the Principality of Monaco is a privilege that more and more Italians are allowed.
Yes, because the number of our fellow citizens who have chosen, generally for tax opportunities, to take up the Monegasque residence is constantly growing.
Yet at the last "Imagina", Montecarlo's exhibition on digital animation, the Italian presence was reduced to light.
A small representation, but of quality, since between trade fair and digital video exhibition The Made in Italy product has been a good success.
To contend the palm of best feature film to behemoths of the type "Star wars", "Robots" and "Harry Potter", in fact, there was also a small but elegant work of the 26enne Grossetan Claudio Castelli, who with "futurist Toys" wanted to pay homage to the genius of That avant-garde of ' 900 that counted names like Depero, Boccioni, Marinetti and Carrà.
For castles, then, a catwalk of prestige, in view maybe of a career in the world of animation cinema.
And just to the sector of the Great productions Cinetelevisive is addressed another Italian product seen to "Imagina".
It's called "See and Sound", and it's a project to make the sound of movies and videos three-dimensional.
A software able, in practice, to balance the sound sources according to the movements on the scene of the characters.
Just apply a special mask to the movie, with lots of viewfinders on the sources to follow, to hear the sound move away and get closer.
As if you were at the center of the action.
All produced between Livorno, Ag Solutions, and Rome, where Zp Engineering manufactures special hardware boxes functional to the program.
A quality project that has already met the favor of American movie giants.
And always in the 3d sound industry, also an interactive system to study the diffusion of sound in anticipation of a concert or a show.
Finally, among the stands of "Imagina" a small surprise: a well-known face of television, cinema and Italian theatre.
Remo Group, now liberated from the mask of the "octopus", and always protagonist on the Italian stages, reveals his curiosity for new technologies. 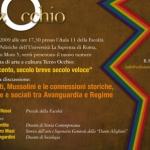